This weekend marked The 78 Project’s one year anniversary.  Labor Day weekend of 2011 we had a marathon first three shoots, Dawn Landes in the Brooklyn Botanic Garden, The Reverend John DeLore and Kara Suzanne at the High Horse Saloon, and The Mynabirds in our backyard in Williamsburg (the episodes from those shoots are reposted below!)  We knew then that something special was happening.

We talked many times this year about a time when we’d be on the road, traveling to record.  Now that we are, it’s every bit as challenging and spectacular as we dreamed it could be.  We’re so thankful for the wonderful generosity of the musicians, friends and enthusiasts who have helped us to take The 78 Project this far.  This first year’s work is dedicated to you all. 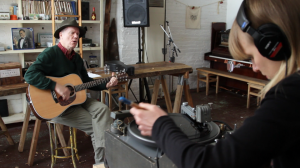 Episode #9 of The 78 Project: Adam Arcuragi “How Can I Keep from Singing?” 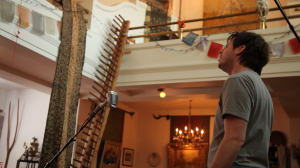 Two doors on an unassuming block in Harlem open to reveal a splendid church turned into a home. All instruments are laid down to reveal the human voice in all of its vulnerability and glory. Some beautiful things, usually hidden, are revealed all at once.

Adam Arcuragi has a churchgoer’s understanding of how to sing praise, how to surrender fear and fill up the immense space with feeling, to lift the spirit closer to its devotion. He has nearness in mind when he plunges into “How Can I Keep from Singing?” unaccompanied except for the natural reverb in the vaulted room.

We felt so close to Adam’s bare voice that we became aware of the nearness of the ceiling to our heads, and when we took the finished acetate outside to the garden to listen, we felt the sky close to our faces and the nearness of a time long gone.

Dearest thanks to Michel for his generosity and hospitality.

Willie is one bad character. First we heard of him, he was the wolf who lured “Pretty Polly” to an early grave. He disappeared off to sea, and we thought we’d seen his last, until Vandaveer arrived with news.

With harmonies mournful, chilling and precise, Mark and Rose sang us the story of his terrible crime in “Banks of the Ohio.” The banjo plucked out a tune as tense as can be. It was too tragic to be believed, he’d taken another life.

We listened back, through the crackle of the 78 and the thickness of the hot winter room. It sounded like our man Willie, no doubt about that.

Right at the outset they proclaim “Death is here!” as if after the events of the first side of Vandaveer’s acetate, there was any other possible outcome.

There was a playful confidence in his motions as he got out his guitar and told stories of hats and ukuleles and cowboys and family. Industrial street noises and a lively chill air seeped in through the walls of the secret Brooklyn fishing club as we set up to record. “Old Paint” is a distinct and fundamental piece of Loudon’s personal musical history, and he put all of his years of performance into those three minutes of acetate. The song is so much a part of him that he played it with a concentration nearing transcendent, his voice so familiar to us that it filled the space and we could no longer hear the trucks passing. The click of the switch announced the end and the Presto’s turntable slowed. The things best known to us are sometimes most able to surprise.

Special thanks again to the Brooklyn Rod & Gun for making us honorary members for the afternoon. We love your peanuts.

The elation at the end of a long day of recording mixed with the sweet burn of a 78 Sour as the bar moved into happy hour and we moved into the bar.

Some of the gathered crowd knew what would happen, some wondered what we were doing. They lingered nearby, craning their necks to get a better look at the mesmerizing Valerie and the strange old machine on the table in front of her.

Valerie was a pro by this time. “Wildwood Flower” was the fourth side she’d sung in one day, the fourth time she’d watched our needle drop, the fourth wild mass of chip she’d displaced with her wild voice. And she kicked off of that momentum, straight into a final song so spirited that it hushed and entranced an entire Brooklyn bar.

Thanks again to Pete’s Candy Store in Brooklyn, NY, for letting us in, and inventing our new signature drink. 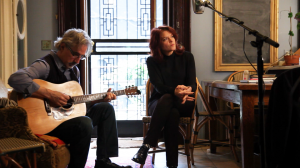