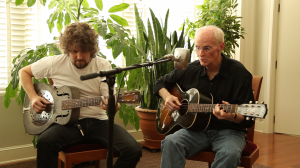 Sid Selvidge is a performer and folk music scholar of the highest order. It’s a well-deserved rap he caught from devoting himself congenially and tirelessly to knowing the people and learning the songs of the South. And of course, to contributing his own songs to the story. Sid is a walking record of Delta music and the American folk scene as it has been and as it is, with stories for days and an ear ready for any new ones you might want to share with him.

Sid had a memory of the Frank Stokes song “I Got Mine” from hearing it on a sampler, he recalled it being catchy and sly. A song that puts its singer in the shoes of a rascally gambler out for a good time. But as he discovered, listening to it again, the exact lyrics are hard to make out. He looked them up, and found enough different versions to keep you confused for a week. So, acting in the truest folk music spirit, Sid just picked the words he liked and rolled with it, the version that now goes on record as his. 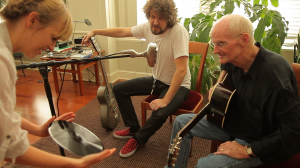 Things do change and stay the same in equal parts. For Sid, his son Steve, and for us the day we recorded them together in Memphis, that meant hearing Sid singing a song he’d sung so many times before, but in a changed voice and on a very old format. It was Sid’s idea, to hear the old and the new together this way, the perfect test of time, and the perfect record of place.