When we enter into a New Year, we are never sure what we will find. We can look back on the year past and count all the things that happened most unexpectedly, both challenging and wonderful, but we will never know what the year ahead holds until we begin to live it.

As we cue up 2015 on the turntable of time, we feel optimistic. 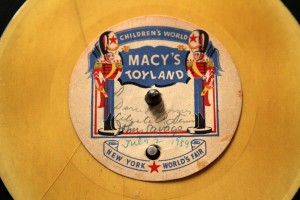 It’s a most beautiful trait in human beings, our ability to marvel at what is possible. To delight in potential and progress. It helps us through otherwise trying times. We have found this to be true all year as we forged new paths in our journey, released two soundtrack albums and a feature film, cut records, put many more thousands of miles on the car, improvised, attempted to innovate, came out alive and happy.

All of this is why this found souvenir recording of two sisters at the 1939 New York World’s Fair – bought months ago without knowing its contents purely because it was made on a Presto – seemed like just the right tone to usher in the New Year. The record begins with the host at the Macy’s Pavilion asking, Celeste, won’t you tell me what you think of the worlds fair? To which Celeste replies, Why it’s simply wonderful…

There are many things in 2015 that we can’t know yet to expect. But we are looking forward with wonder and awe, to the year ahead and what it will bring. And we are looking back with gratitude at the year we’ve just lived and all the things it contained that we never could have wished for, but wanted more than anything.
Play
Stop
Pop-Out