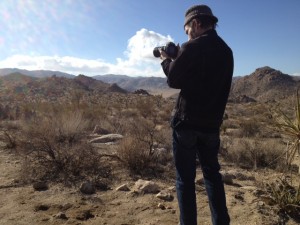 Something drew us into that café. With it’s squeaky screen door, two tiny tables and unassuming presence at the end of the block, it just looked like the place where the locals go.  We were passing through Joshua Tree on our way to Wonder Valley and had stopped in for a quick bite to eat.  When Victoria Williams walked through the café door, we could hardly believe it.  The luck!  She told us her sweet dog Beau had led her there, and we’re inclined to thank him here now.  We asked her if she’d like to make a record later that week and were thrilled to find that she did! 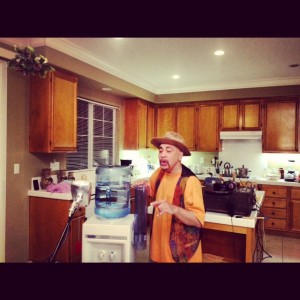 The next day we sped back west to meet an old friend for a very unique recording.  Coati Mundi had tested every spoon in his kitchen, he told us when we arrived at his Murrieta, CA home.  He’d chosen the perfect two, the ones that sounded the best in the bright-sounding room.  The version of “Billy Boy” he had cooked up was truly original, infused with Latin percussion and the strangeness of a memory he has of learning the song as a city kid sent to the country for some fresh air.  Over a home-cooked meal Coati reminisced with his sister about the Midtown disc-recording booths and rock concerts of their childhood.  And he even played us the very first acetate he ever cut as a young piano player in New York City. 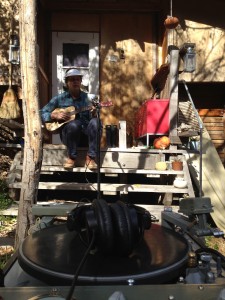 A couple hours drive away in LA the next morning, we were scaling Topanga Canyon in search of Little Wings.  He met us in the road and guided us up to a steep parking spot, then helped us haul our gear down dirt paths and up homemade stone staircases to a lovely, sundappled little utopia where he spends half the year in a tiny cabin.  We assembled on the porch to record his mesmerizing take on “Nobody Knows the Trouble I’ve Seen”, and afterwards, he broke out his spray paint and stamps to customize the record sleeve. 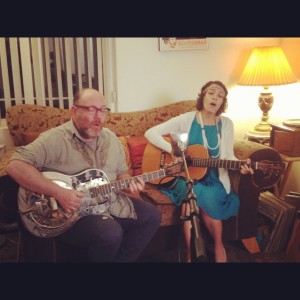 Later that day in a cozy apartment in Studio City, Adam Levy & Gaby Moreno patiently practiced their smokin’ hot jazz while we disassembled the Presto to replace some tired tubes.  If it sounds scary, that’s because it was!  With no backup on hand, our Presto had to work.  Many fraught moments later, the platter was back on and spinning.  With the crisis averted, Adam and Gaby performed a sparkling version of “After You’ve Gone” that we’re sure will be one for the ages. 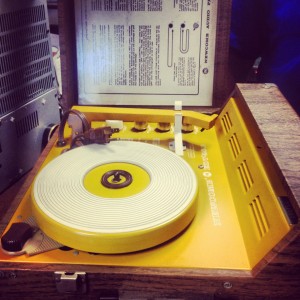 Gaby had been kind enough to let us use her just-bought vintage suitcase Newcomb turntable to play back their acetate, and after hearing its beautiful warm sound, we knew we had to get one.  She and our friend and master audiophile Tom DeSavia directed us to the Audio Specialist.  He turned out to be the vintage dealer of our dreams, outfitting us with the perfect new playback turntable. 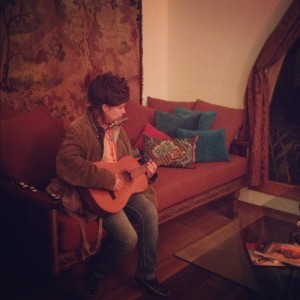 We arranged to meet Victoria at her friends’ house in Echo Park a few days after we’d run into her in Joshua Tree.  When we arrived, she and Beau were waiting for us with great-sounding a spot all picked out in the beautiful front room.  Victoria’s friend Gabe Noel came over with his cello to accompany her as she sang “Take This Hammer” with her undeniable style and breathtaking grace.  Over a dinner of vegetables from the garden out front, Victoria and her friends gave us a wonderful feeling of home so far away from our own.

It had been almost two weeks since we’d arrived in California, and those two weeks had been monumental.  There was just one more record to cut to complete this most amazing trip.  We packed up our car, bid our lovely LA hosts Elli and Andy goodbye, and started north for Pasadena.

Tom Brosseau & John Reilly were waiting for us, warming up their voices and guitars.  They spun through an impressive repertoire of classic songs, wowing us at every subtle turn of their harmonies.  Settling on two perfect tunes, “Careless Love” and “Single Girl’, the duo made an acetate of true distinction marked by the beautiful sound of true friendship and collaboration.

Later that night, we saw them perform at the Sanctuary in Santa Monica along with their friends Becky Stark (Lavender Diamond) and Willie Watson.  And who should we see there but Victoria! It was a wonderful way to end our week in LA, and we headed back North with our hearts full of happiness and our car full of unbelievable records.

Before catching our flight, we stopped in to say hello to our old friend Mia Riddle in Santa Cruz, then headed the rest of the way up the coast back to San Francisco, the place where this whole wild trip started.  A new year began while we were on the road filming this next chapter in The 78 Project Movie, and we feel the newness now, filled with potential and excitement, as we write this.  It’s off to an amazing start thanks to our friends and supporters and to this fantastic West Coast journey, now complete.