On a warm morning in Memphis, during our Southern Road Trip, we met Star & Micey in St. Mary’s Cathedral. They started the day with this sweet and haunting version of “Twinkle, Twinkle, Little Star”, and as the days warm up and we start this summer, we’re excited to share it with you.

We think about this performance often, the beauty of the sound and the setting, the way loneliness can be soothed by singing. So it was a joy to include it in the bonus materials included with The 78 Project Movie. And to share even more of this immense journey with you. 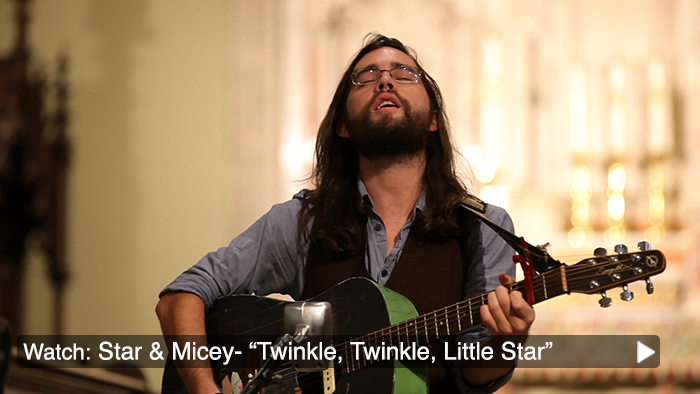 Thank you again to the city of Memphis and all of our dear friends there.

In the Homestretch: The final week of our Kickstarter

This month of connecting with our friends, family and fans to fund our movie has been wonderful.  We feel so energized by everyone’s support!

Our Kickstarter campaign to fund The 78 Project Feature Film ends Friday, October 5. We can finish strong with your help!

These next few days are your last chance to contribute to our movie fund.  We’d love to have you be a part of this journey! Please go to our Kickstarter campaign page and read a little bit more about our fundraising efforts and plans for finishing the film. And donate if you can!

This movie has already exceeded our expectations, and we still have more shooting ahead!  We compiled this video for our Kickstarter, made of moments from the The 78 Project web series, to give an idea of the kinds of experiences we will be finding as we shoot the film.  Take a look, and if you like what we’re doing, please join in and help us continue.

So many amazing things have happened this month as a result of this community-driven funding campaign.

We had the opportunity to post four great new tracks from our adventure  as updates in our campaign.  You can hear Arborea‘s “Red Bird,” Ella Mae Bowen‘s flipside song “Heart Locked Out,” Timmy Mislock performing “Satan, Your Kingdom Must Come Down,” and Star & Micey‘s flipside “Rocky Song.”

Plus we’ve gotten wonderful press. Over the last two weeks our project and our Kickstarter campaign were featured in The Village Voice, USA Today’s PopCandy blog and The Awl.

Thank you truly and deeply for watching and listening and supporting The 78 Project!

Red Ants and Rainstorms, Fathers and Sons: The 78 Project in Memphis 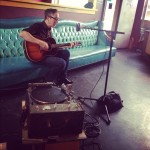 Tropical rainstorms were turning the streets of Memphis into rivers, but inside the Hi Tone we were safe and sound, tucked in and battened down to make an acetate with John Paul Keith. We thought for sure some of the raging rain would make it onto John Paul’s rendition of “The Knoxville Girl,” but when we played it back, it was as pure and sweet and clear as a brutal murder song can be, a testament to John Paul’s skills as a singer and a scholar of music. 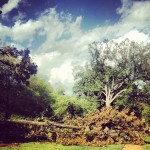 Driving around Memphis, we saw the effects of Hurricane Isaac in downed trees and sodden grass, but everyone seemed in great spirits.  It was a holiday weekend, and everyone was manning a BBQ and humming a tune, in their element as Memphians.  Our host for the week was our dear friend Ward of Archer Records, and he showed us infinite generosity, trading us his breakfast table (we turned it into our base of Memphis operations) for a couple mornings worth of Stumptown and some good conversation.

We were eager to see Luther Dickinson in his home state of Mississippi, after having such a wonderful time recording with him and his Memphis supergroup The Wandering in New York back in May.  He led us down to Hernando, to the DeSoto County Museum to make a recording on the porch in the shimmery heat of the afternoon. Luther played a mean streak through “Mississippi Boll Weevil Blues” and the floorboards creaked to his time.  You can’t tell a bluesman not to stomp his foot, however, and that’s all we’ll say about that for now. 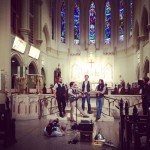 Tuesday was a marathon day with three recordings planned.  We faced it bravely, rising early to take over St. Mary’s Cathedral for the morning with Star & Micey with Jeremy Stanfill.  The vaulted ceilings of a spectacular church showed the Presto more reverb than it had encountered in it’s wildest tube dreams (do Prestos dream of reverb-filled rooms?) and Josh, Nick, Geoff and Jeremy melted their voices together in lovely harmony. 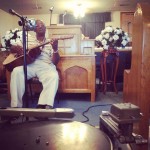 The afternoon brought us back to Mississippi, this time to Hunter’s Chapel in Como.  The chapel is filled with the history of Mississippi music – Mississippi Fred McDowell and Othar Turner both attended and McDowell recorded there in 1964 – and the Reverend John Wilkins lives that musical legacy with his gospel blues singing and his devotion to the people of his church.  We had been told that the Reverend plays the hill country blues in the way of his father, the renowned singing Reverend Robert Wilkins.  And when we heard him, we saw that it was breathtakingly true.  He invited us in and made us feel at home in his chapel, then played for us “I Want Jesus to Walk With Me” and “Jesus Will Fix It.” His rich voice and skilled finger-picking cast a transcendent spell over the room, and when he heard his record played back, his father’s voice echoed out from the lacquer.

WATCH: Reverend John Wilkins performs “I Want Jesus to Walk with Me”

We promised to return for a Sunday service, and bid Reverend Wilkins farewell.  Red ants from the Mississippi ground stowed away in our shoes as we drove back for Memphis.  We had one more record to make that day. 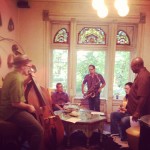 Scott Bomar had invited us to join him and members of his band The Bo-Keys with Percy Wiggins at Molly Fontaine.  Six musicians was the largest group we’d ever attempted to work around one mic, but we were excited for the challenge.  Drums, upright bass, trumpet, sax, electric guitar and Percy’s powerful voice all found a space in a single groove, and afterwards we felt sure that the band’s version of “Deep River” would become the definitive one. 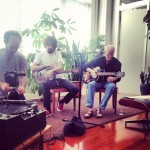 We couldn’t have wished for a more wonderful recording to make on our final day in Memphis.  Wednesday afternoon we had a visit from Sid Selvidge and his son Steve Selvidge.  They brought their guitars out and Sid unpacked some fascinating and laugh-out-loud stories from his lifelong search for songs and his great appreciation of his fellow musicians. He also unpacked a jaunty performance of the Frank Stokes song “I Got Mine.”  Sid recently found his voice had deepened, and he was very interested to hear it recorded on 78.  Every ounce of what makes him a folk scene hero was there in the record, and there was no denying that the family musical bonds between Sid and Steve are as strong as a double-wound steel string, their playing danced and joined together in joyful, rascally song. 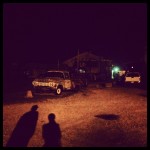 Earlier in the week, to record with Luther, we’d taken the scenic route down through North Mississippi. Afterwards we’d felt so full of the place that we decided to continue on south for a while before heading back up to Memphis.  So as the sun set, we hit the road for Clarksdale, getting there as night fell in a fluttering cloud of insects and ghosts.  We visited the Crossroads, as you must, and drove into the deep darkness of the unpaved roads around the city to find a drink and some more history.  We returned to Memphis late in the night, coated in humidity and dotted with insect roadkill and possessed with a feeling that time had compressed to bring the past and future together at once. It summed up our time there in a nutshell, as Memphis and the region around it is a place that defies time.

Leaving Memphis wasn’t easy after the generosity the place had shown us, but we needed to make tracks for home.  As we crossed Tennessee, long spidery blasts of lightning crossed the sky and rain plowed down on us.  We felt honored that the state went to such great lengths to keep us inside it’s borders. But the cement and 6-lanes between us and home were calling, and we were excited to get back to start playing these amazing records and films for you.