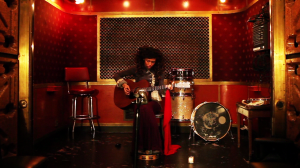 Happy Solstice from The 78 Project: Strings of streetlights, even stoplights, blink a bright red and green…

At the end of a long episode shoot, in a hotel room made tropical by radiators older than our PRESTOs, Vandaveer’s Mark Charles Heidinger and Rose Guerin, with J. Tom Hnatow on banjo, made our season bright with a holiday greeting custom made for The 78 Project.  We brought out a fresh acetate, and they recorded a festive message and beautiful rendition of the classic New York Christmas song “Silver Bells.”

From all of us at The 78 Project, our dearest wishes for a peaceful, happy season.  Thank you for listening and watching this year.